The need for more rooftop gardens 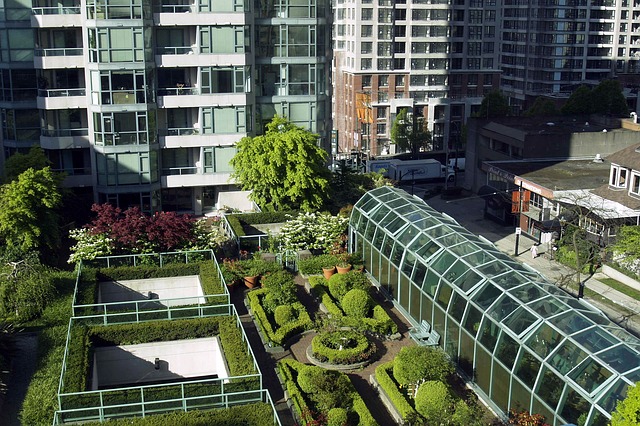 The current housing crisis across California and the legislature is pressuring cities to allow more and taller residential buildings are creating even denser neighborhoods and cities. In San Francisco, for example, which is surrounded by water on all three sides and where land has almost always been scarce, we see more and more residential development projects in already dense neighborhoods, such as the Mission. The new buildings almost always use up every square inch of their parcel of land and build them as tall as possible to get the most number of residential units possible. The reason for his, of course, is profit, but also to generate as many units as feasible. Again, however, there is a visible impact on the neighborhood.

The new tall residential buildings springing up everywhere often dwarf the neighboring structures and create a “mini skyline” that looks sorely out of place. Also, they contribute to the amount of hardscape in a city, which s impermeable surface and not particularly eco-friendly. However, some developers and their architects will include rooftop gardens, which ameliorate the negative impacts of building more hard surfaces and structures. The rooftop gardens provide permeable surfaces, which can better absorb rainwater; they reduce the city’s heat island effect; they provide better insulation for the dwelling right underneath and provide a healthy green space for residents and visitors. Yet with all these benefits, very few rooftop gardens are proposed since they are not currently a building department requirement. However, that might change in the near future as green space becomes even scarcer.

Speaking on a smaller scale, our houses can also be retrofitted for rooftop gardens, which provide direct benefits for the residents and help mitigate the lack of landscaped areas in a neighborhood or city. The benefits mentioned earlier for a homeowner include better insulation and a longer life for the roofs than for conventional roofs. Additionally, they reduce the amount of stormwater runoff since a large amount of it infiltrates into the layer of soil used for the garden plants. And although there is a cost to retrofitting a roof, the long-term savings in heating and cooling, as well as the increased longevity of the roof, has been proven to be more cost-effective.

In general, retrofitting an existing roof to accommodate a roof garden requires a structural inspection, as well as potential structural improvements; installing an impermeable layer to allow for natural irrigation of the plants; and drainage to ensure that water does not pond anywhere on the roof, which can cause leaks and other severe damage. Additionally, depending on a homeowner’s preference and size of the roof, fencing may be placed along with the perimeter and garden furniture and permanent stairs or other kinds of access. In other words, homeowners can choose to make their roof gardens as intricate as possible to fit their needs and budgets. But whatever a roof garden looks like in the end, it is always a benefit to the homeowners and communities.

The need for more rooftop gardens

“IoT brings resource gains, #sustainability to agriculture - Sensors, LoRa, and LoRaWAN bring benefits to farmers across the globe -- and in a variety of use cases.” https://buff.ly/3QECya5

Davos 2022: Technology And Collaboration Are Key To #Sustainability https://buff.ly/3xZLk9Y

Grappling With The Paradox Of Less Is More: Trends In Affordability And #Sustainability https://buff.ly/3by1obL

Google #sustainability lead explains how the company is building a greener cloud as environmental concerns become a key battleground against rivals Amazon and Microsoft https://buff.ly/3ONCzHb

ADA Ramps and Paths are important for all of us https://buff.ly/3HTsWUR @ComplyAccess

The Sustainable Economy Doesn’t Have to Be a Luxury Market https://buff.ly/3n5QFrp

“Making a difference on the #sustainability front - Dairy processors share their success stories within the sustainability arena.” https://buff.ly/3NnDMDT

“8 ways renters can make their homes greener - Renting a house or an apartment can make living more sustainably challenging. These small, inexpensive changes are better for the environment — and your wallet.” https://buff.ly/3Ovchty

“6 Of The Most Unsustainable Cities, Analyzed - Turn off the Water When You’re Brushing Your Teeth!” https://buff.ly/3mVUkIk