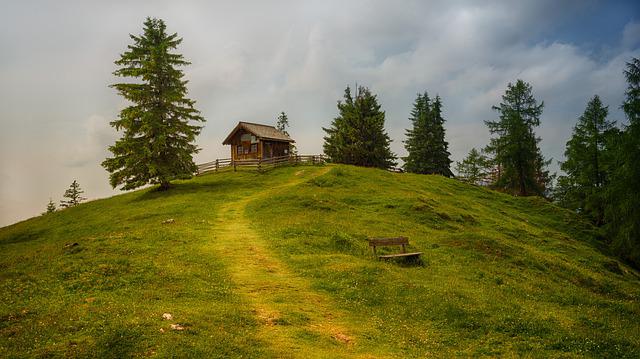 Though the image above might be a bit too fantastic a goal to achieve when grading a piece of land for construction, the intent is nonetheless what is important. In the image, the shock is placed in the obvious location; the flat part of the site. Additionally, the road follows the natural contouring of the hill. In this example, the grading design would be the easiest, most affordable, and probably the most viable for the time. However, since machinery has become affordable and more easily acquirable, we, as engineers, tried to reshape the land to make it flatter, easier to build on, and build more on it, and so on. And although sometimes this practice is unavoidable, there are many instances in which we do not have to distort the original terrain.

I am currently working on two particular projects located on land with some considerable to substantial slopes. In both cases, it would be easier to design a few retaining walls and create a site as flat as possible. However, this would require severe excavation and excess soil, which would need to be removed and dumped at another location; years ago, this might have been standard practice, but government agencies, cost, and the desire to design and build in a more eco-friendly manner are motivating us to look for alternative and more creative design options.

Since I live in San Francisco, evidence of cut and fill practices is abundant. They have created impressive construction projects, such as Lombard Street, hillside gardens, and picturesque stairs all over the city. However, as I work on various civil design projects, I can envision a newly built environment project that better fits into the existing grades. And not only will the sites look more natural, but they will also be less costly. For example, at one of the projects, there are two existing low points, which the existing installed drainage inlets are not capable of draining. In other words, there is severe ponding. Therefore, rather than regarding and installing an additional inlet or relocating the existing ones, we will design a rain garden at these locations, which will capture the stormwater runoff and irrigate the proposed planting, as well as filter out the pollutants and allow the runoff to percolate back into the groundwater. This exercise will not only save money by eliminating the need to trench and install additional manholes, inlets, and piping. Still, it will eliminate a portion of the stormwater runoff that would have ultimately been treated along with sanitary sewage and dumped back into the San Francisco Bay.

As a substitute for earthwork practices, such as rough and fine grading, we leave the natural slopes as they are but add planting to mitigate erosion and landslides, wherever feasible, and employ landscape retaining structures. And although these require ongoing maintenance and stewardship, the outcome will be more eco-friendly, aesthetically pleasing, and less costly, even with the required landscape maintenance. Other benefits include increasing the local green space area, rainwater harvesting, and general improvements to the neighborhood and community.

This Breakthrough In Wind Power Will Revolutionise The World https://buff.ly/3RmWjSU

How a digital approach can lead to a sustainable supply chain https://buff.ly/3L6meg2

Workplace Sustainability To Be Preferred By 32% of Employees For Better Results https://buff.ly/3RCseiY